Press Releases
Tracking Twites at Doveholes Quarry
Over the May Bank Holiday, RSPB colleagues and volunteers headed to Dove Holes to try and tag some of the small colony of Twites that live in the Quarry. 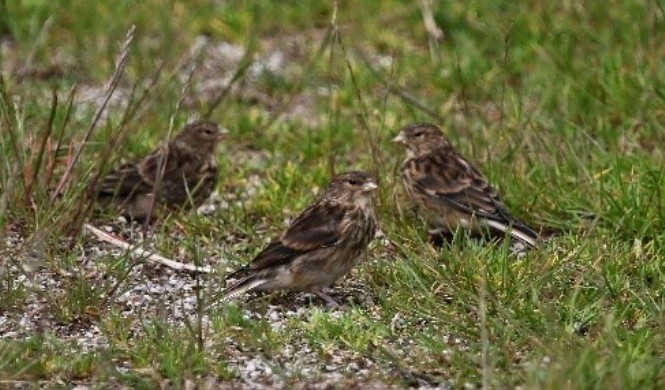 The tiny trackers which weigh less than a pinch of salt (only 0.5grams) were fitted with the aim of helping scientists find out how the Twites seek food and shelter. But no luck!

The birds were not to be seen perhaps due to the hot weather or maybe the plentiful supply of food throughout the Quarry. Finally, two males were tagged at the beginning of July.

The trackers have a battery life of one week and after that they fall off. However, the week’s worth of data will enable scientists to map areas within and around the Quarry that the birds are using. Trackers are only fitted to male Twites to avoid disturbing breeding females.

The Twite is an English songbird that without help may disappear completely from England, the decline of the species is so concerning that it is on the conservation 'Red List'. Twites numbers have suffered as the availability of autumn seeds as well as mature heather and bracken has become scarcer, resulting in less food and suitable nesting sites.

There are only 170 pairs left in the country, and despite our Dove Holes Quarry near Buxton, Derbyshire being home to less than ten pairs it represents a significant population (the picture shows Teenage Twites at Dove Holes taken by Peter Welch).