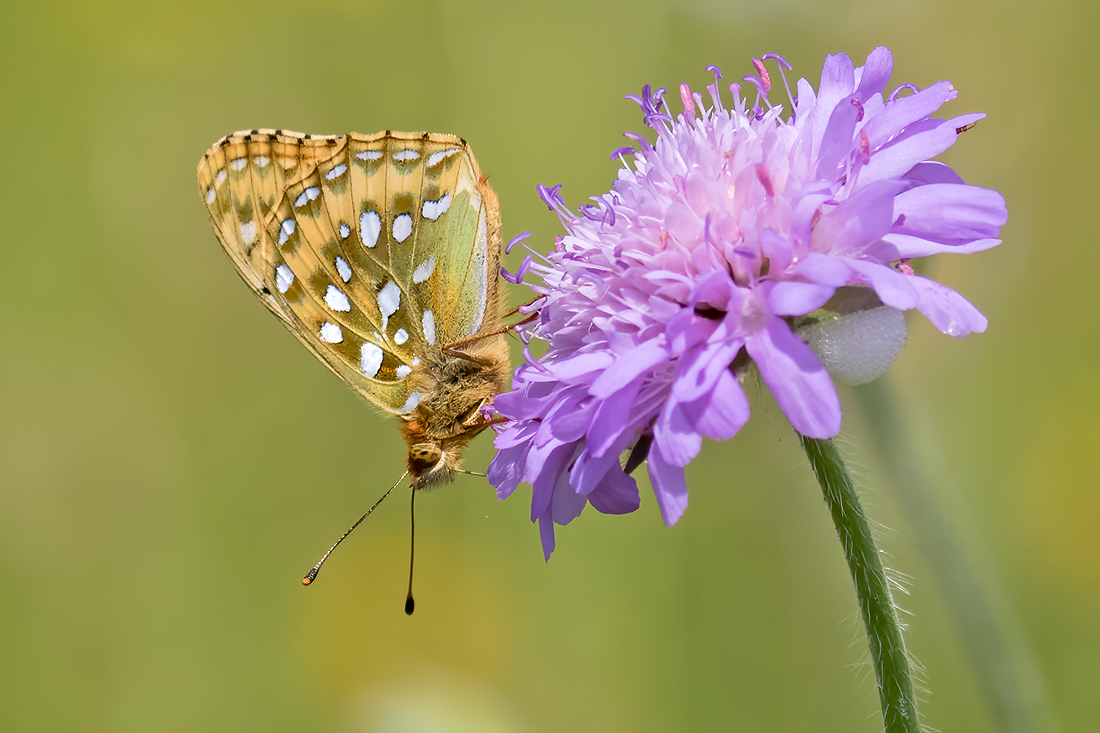 By the early 1990s the Dark Green Fritillary was thought to be extinct until a small colony was rediscovered at a former site in the centre of the County.  Since then, a huge amount of conservation effort has gone into restoring the fortunes of this butterfly.  This effort has paid dividends since Warwickshire now has at least 11 colonies of Dark Green Fritillary and possibly as many as 17.  This success would not have been achieved without Butterfly Conservation working in partnership with landowners and other wildlife organisations such as the RSPB.  One of the most successful partnerships has been with CEMEX and the RSPB at a number of sites near Southam and in Rugby.
In 2013 an area of former quarrying was chosen to try and create bespoke Dark Green Fritillary habitat.  It was a spoilbank that had become covered in dense hawthorn scrub which had started to swamp out the delicate wildflowers associated with calcareous or limestone grasslands.  The flowers suffering from this scrub encroachment were not only the many orchids such as Greater Butterfly Orchid but also the violets that are the Dark Green Fritillary’s caterpillar food plant.
A plan was formulated with the support of CEMEX to create a scrub/grassland mosaic.  Rather than removing all of the scrub some would be retained in order to provide shelter and the newly created grassy glades would be connected together with wide flowery paths.  The remaining scrub would also create shade that would prevent the violets (caterpillar foodplant) from becoming desiccated in the summer sun which could lead to the starvation of the caterpillars.
Since the initial scrub clearance, the grasslands are generally being maintained in the correct condition for the Dark Green Fritillary by the grazing of the local deer and rabbit populations.  However, in years when this grazing is insufficient to maintain the right conditions, then CEMEX come to the rescue by flailing the area to prevent the scrub becoming too dominant again.
Thanks to all this conservation work, the Dark Green Fritillary not only successfully colonised Southam Quarry in 2018 but, because of the near perfect habitat created, the colony has become one of the largest in Warwickshire.
Image credit: Keith Warmington